This is a week where I had two of my seminary classes overlap which I thought would severely cut into my reading time. However, I had the best reading week I’ve had in a while.  I had a couple of “surprise” finishes with a Bible study and an audiobook finish, so that definitely helped boost me to having four finishes. Even more importantly, I read two novels that I really loved (both backlist).

This week our church finished a sermon series on Galatians, marking the third time I’ve read through Galatians in the last year. It’s a small and deceptively simple writing by Paul. He clearly lays out the idea that Christ has come to set us free, not only from sin, but from the striving to live and abide by law for our right standing with God. Every time I read through this book, I learn something new, so for a short book, it is a very fruitful study. If you’re curious about Christians and what Christians should (and do) believe, this  book provides a picture of the cornerstone of Christian doctrine.

Leia, a 38-year-old comic book illustrator, had a one night stand with Batman. Now, she’s pregnant and not telling anyone. Her “almost sister,” stepsister Rachel, is currently undergoing a crisis of her own. Meanwhile, a few states away in Alabama, Leia’s grandmother has a public incident that has Leia and her niece, Lavender, flying to Alabama to assess whether or not it is time for Birchie and her almost sister, Wattie to be moved to the nursing home.

The story is fast-paced, character-driven, and has so much family drama. Jackson also deals with the ideas of racism in the south, what it is like to grow up without a father, and how sisters relate to each other, especially when their relationship is set up to be naturally contentious. I loved this book and I could not read it fast enough. Beautiful writing and wonderful characterization. I probably could have read a book about this family that was twice as long as this 350 page novel. I was disappointed to not have more to read. I really can’t believe I’ve had this one sitting on my Kindle as long as I have without reading it.

Knock Three Times is the third book in the middle-grade The Wizards of Once series. Xar and Wish are still adventuring together, along with their entourage of bodyguards, tutors and magical creatures. This book opens with them fleeing from their parents to pursue a confrontation with the Nuckalavee. I can’t say anything more in plot set-up without giving away major spoilers, and if you haven’t read the books, just what I’ve said may sound odd and confusing.

I am really enjoying seeing the character development here with both the main characters and the minor ones. However, this book dragged a little in the middle, so it was not quite as good as its predecessors. I listened to this one on audiobook with my kids, and David Tennant’s narration is excellent! 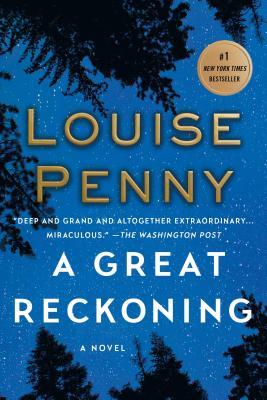 A Great Reckoning is the twelfth Inspector Gamache novel. In this installment, Penny returns to the topic of some previous books, the ongoing corruption in the Surete du Quebec. Gamache decides that he wants to attempt to help fix the corruption in the Surete at the root by becoming the commander of the police academy. Of course, there is opposition to his changes, and also, of course, there is a murder. During the ensuing investigation, even Gamache’s closest associates find themselves wondering whether or not Gamache is capable of murder.

This is a great book. We have the reappearance of a former antagonist. We have a group of new cadets. We have a seemingly (and maybe completely) unrelated mystery related to a map and a stained glass window in the town of Three Pines. This book fills in a lot of holes in Gamache’s story and made me feel strong waves of both grief and joy. This one is possibly my new favorite in the series. I’ve already picked up the next Gamache and am almost 100 pages into it!

So, I hope everyone else is having a great week. If you live in the US, I hope your Independence Day weekend was great, and also hope that everyone is staying safe.

I'm a 40ish Mom of 4 children and the wife of a kind and supportive man. My interests include reading, theology and learning along with my children. View all posts by RavenThreads